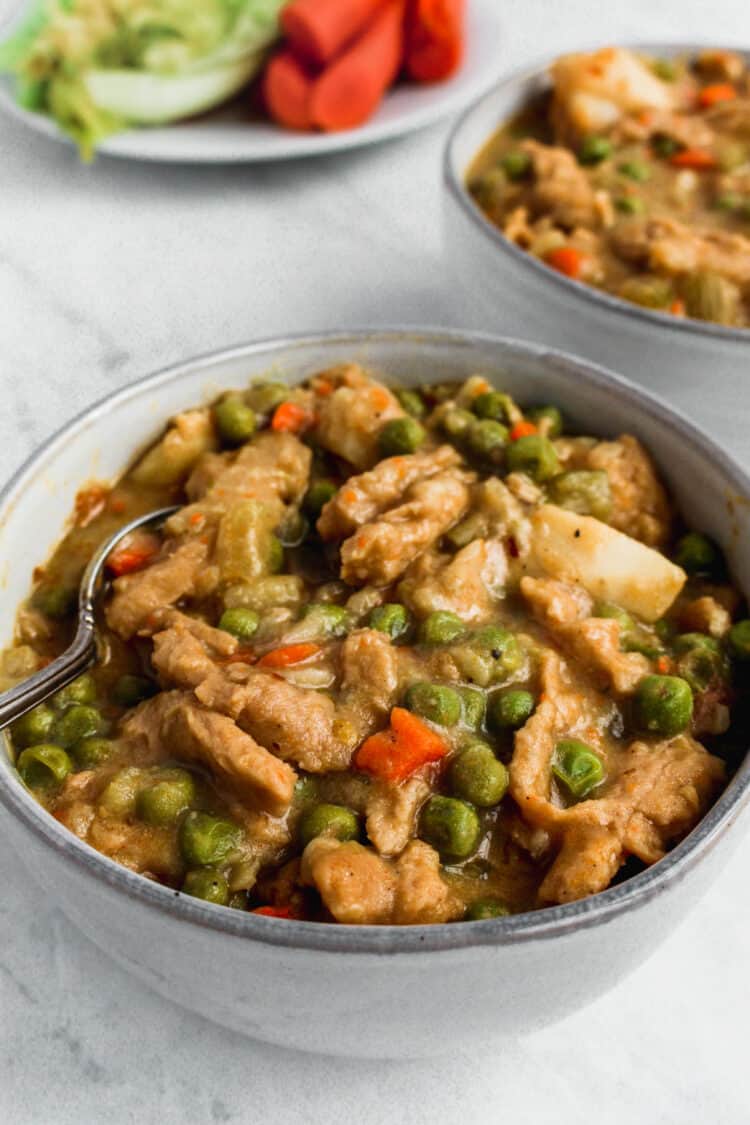 Are you in need of a new and easy soup recipe this fall and winter season?! You are not alone! And this delicious, comforting Vegan ‘Chick’n’ and Potato Soup is just what you have been looking for. This recipe transforms simple ingredients into a creamy, hearty soup that will have you {and everyone else} wanting seconds.

What makes this recipe vegan:

What are Soy Curls?

Soy curls are an excellent plant-based protein option that will satisfy vegans and meat-eaters alike. They have a hearty, chewy texture that is very comparable to chicken. An amazing thing about soy curls is that they are made from the whole soy bean which makes them a high fiber, high protein food. Soy curls are not only delicious, they are easy to use!

Soy curls come dry, or dehydrated, and need to be rehydrated to cook with and eat. In this recipe, the soy curls will rehydrate in the soup while it’s cooking. You do not need to rehydrate the soy curls prior to adding to the soup.

In other recipes you may start with rehydrating the soy curls in water or a broth prior to cooking. This will depend on the recipe and how you plan to prepare them.

You can find soy curls in some grocery stores. You can also order them online.

Alrightyyyy it’s time to whip out your favorite soup pot and get cooking!

*Time saving tip: You can start step 1 in one pot, and then move on to step 2 using your soup pot. Once the potatoes are done, just set aside until it is time to add them in. I have made this with using just one pot, starting with the potatoes, cooked them, strained and set aside in a bowl then moved on to step 2, using the same pot. This works just as well, just prolongs the cooking time by about 15 minutes.

Leftovers are life: Good news, this soups reheats well and makes for a delicious heat and eat meal later in the week.

In the mood for more vegan soup: