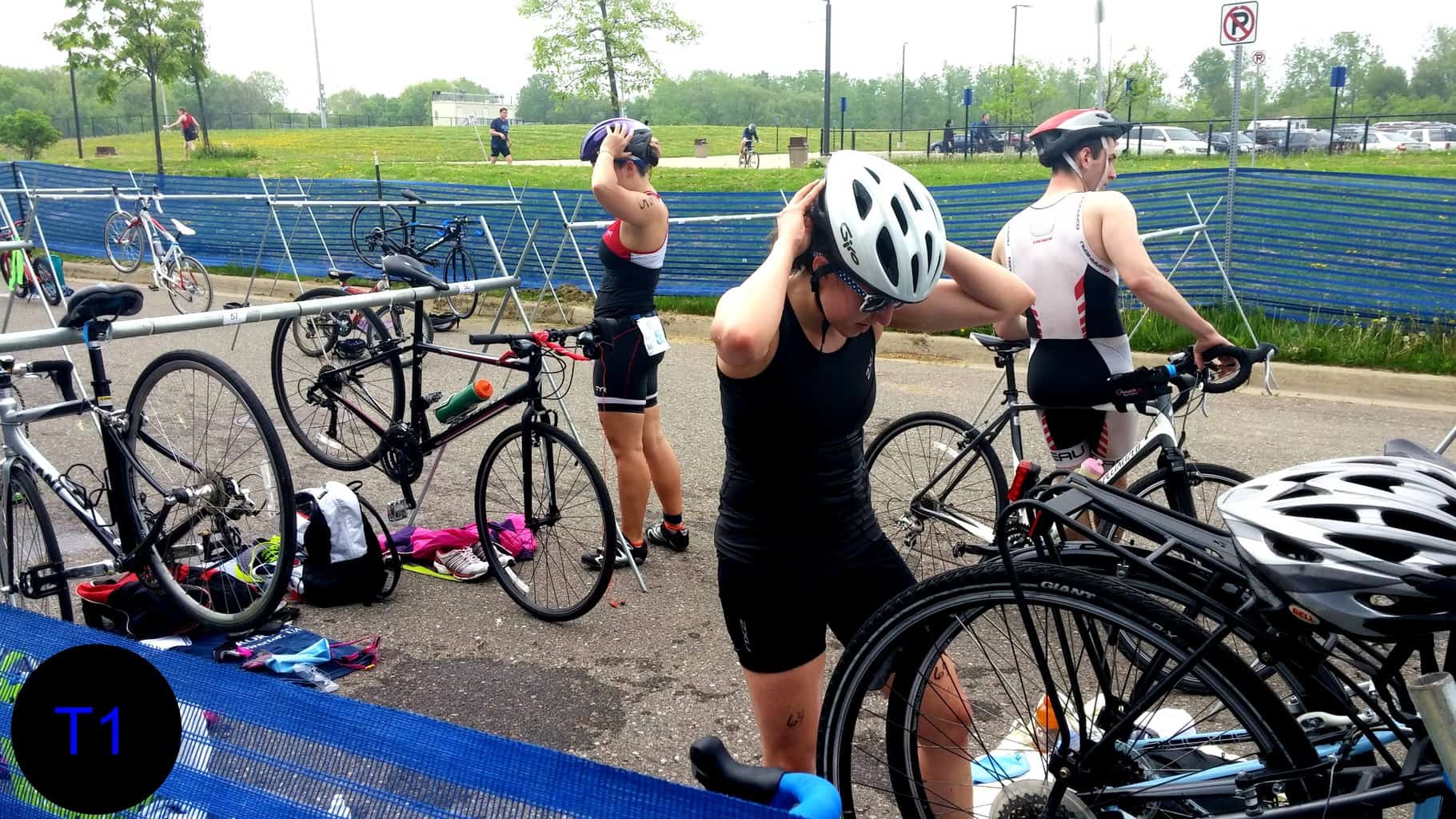 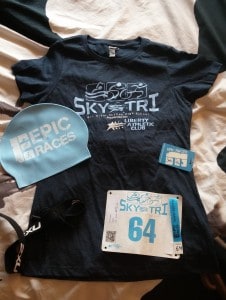 Sunday {May 17th 2015}, I completed the Skyline Sprint Triathlon, or Sky Tri, put on by EPIC races. The race was a 400 meter pool swim, a 12.4 mile bike, and a 5K run. This was my first triathlon so I was very excited and a little (okaaay, maybe more than a little) nervous to participate! I bought a race entry back in the winter during an EPIC races event held at Wolverine brewery. I was under the influence of positive peer pressure from two triathlete friends and a delicious beer or two. Seriously though, if you haven’t been to Wolverine then you are missing out. Completing a tri has always been something I thought I wanted to do. However, I have never been a swimmer so that was the main thing holding me back from signing up. Lucky for me EPIC partnered with Performance Bikes and Ann Arbor Running Company to create a free, yes I said free, tri training program for beginners. The only “catch” was you had to sign up for the Skyline Tri. I got one of my good friends, Emily Jones (who I refer to as Jones), to sign up with me and we began our training in mid-January.

The Couch to Tri program covered so much more than just training for the race. We learned about what to wear, necessary gear, how to change a flat bicycle tire, proper etiquette for road cycling, the ins and outs of setting up your transition area and how to do them efficiently. We had the best and most supportive coaches teaching us everything we needed to know to train for this tri and become better athletes. Their passion for this sport was both contagious and inspiring.

Friday nights we had cycling with Jeremy. During the cold months we rode trainers at Performance Bikes and once the weather got nice we moved our group rides to the road. “You can do anything for 40 seconds” is one of my favorite Jeremy quotes and usually pops in my head during hard interval training sessions.

Sunday’s we had swimming practice out at Saline Rec Center with Cammie and Lou Ann. When I say I was not much of a swimmer, I mean I literally did not know how to swim freestyle and could barely do 50 meters in Jan. Thanks to these ladies’ expertise, encouragement, and instructions to just keep moving, touch the wall every time, and don’t stop to fix your equipment (I had a bad habit of stopping short and fixing/defogging my googles, rookie mistakes) I can now swim 400 meters without stopping. I am also able to finish an hour swim practice without feeling like I am going to die.

Wednesday’s were running with Nick out at AA Running Company. Sadly I did not ever attend a group run there. On Wednesdays, Jones and I swam instead as this was our weakest area and Wednesday happened to be the only night of the week we were able to get together to train. I ran on my own 2 days a week and used to the training schedule provided by EPIC as a guide when planning my workouts.

“The ultimate goal of this program is to help each participant reach athletic goals he or she never thought possible.” – This was in an email I received back in January about the Couch to Tri program and I would have to say this goal was met. I also realized training for something new is so much more enjoyable when you do it with other people and in this case, other newbies. It was a blast getting to know everyone in the group and I looked forward to our weekly training – not only because the training was necessary to reach my goal of completing the tri but because it was fun to be around others who were also new to the sport and had the same goal. The past 15 weeks of training together definitely built a sweet camaraderie within our group and I know this race was so much more fun for me because I got to see everyone crushing their own race & goals.

If you are thinking about signing up for a tri, I say do it. I cannot wait to do another. I also hope to continue training on occasion with my Couch to Tri group.

Morning of: So pumped. Obviously nervous, but I felt prepared. I knew what to expect and that I had done my training. My main goal was to have a good time so that was just what I intended to do.

I had a great cheering/support crew: My parents came in for the weekend to visit and watch the race. My friend Tatiana is the one who encouraged me to sign up & then came to cheer me on. I woke up that morning to the sweetest card tapped to my door from my roommate. My good friend Uryna and her cutie dog Jake also came out. My swim coaches Cammie and Lou Ann were also there cheering us all on. Having people I love at a race brings my excitement to a new level. Granted I don’t expect, but fully welcome, a crowd at every race but my first one was pretty special because of all these people. 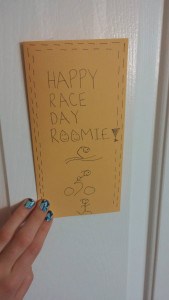 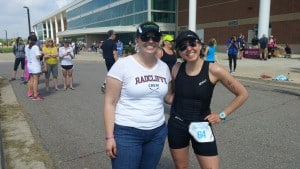 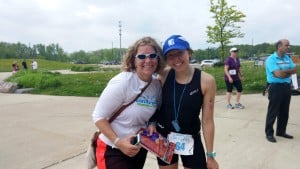 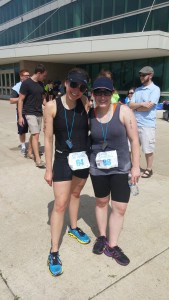 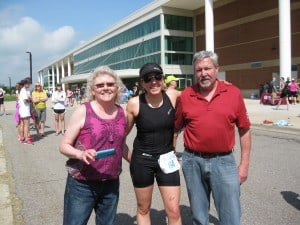 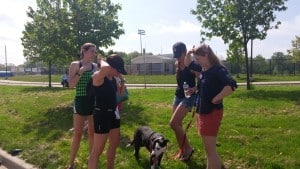 This was a 400 meter pool swim; pool swim = good for beginners! We each entered the pool about 15 seconds apart. We were seeded based upon our expected 400-yard swim time. I got in around the 10 minute swim time. The fastest I ever swam 400 meters during practice was 9:30 but I was feeling like nerves may get in the way and slow me down. Got passed by a few people and had to side stroke and breast stroke a few times to catch my breath but all in all it went well. I completed the swim in 9:30. 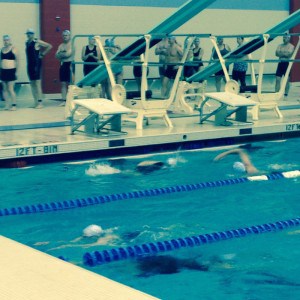 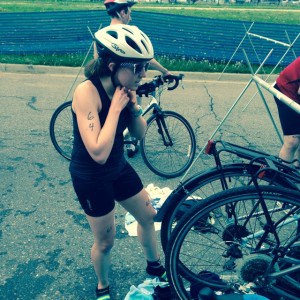 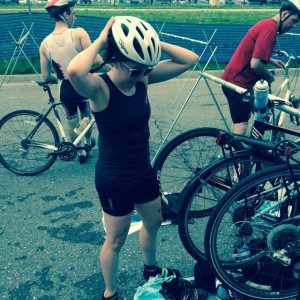 Once I was on my bike I felt this rush of excitement and relief, the swimming was over and now I got to do things I have a little more experience with. The course was beautiful and the whole time I felt really happy. I yelled out and cheered every time I saw one of my fellow Couch to Tri peeps. The course was an out and back along W. Huron River Dr. At the turn around point I got a little thrown off by car who didn’t yield to let me go, some people are just impatient, and I almost went riding down into the ditch but luckily that did not happen. On the way out about .75 mile into the course we rode down a very steep (about 10 degree) hill meaning on the way back we had to climb that baby. Hard, but surprisingly not as bad as I anticipated, I actually passed two people on the way up. Maybe all those spinning classes have given me some hill climbing strength, who knows?!?  I finished the bike in 46:25. I rode my Trek WSD hybrid bike for this race. I bought this bike two years ago so I could commute to work and ride to different parks around Ann Arbor. I love it and it served me well for my first race … BUT now I feel I need/want a rode or tri bike. This seems necessary since I plan to continue to train and race. I would also like to join some group rides and don’t know if I can keep up on my current wheels. 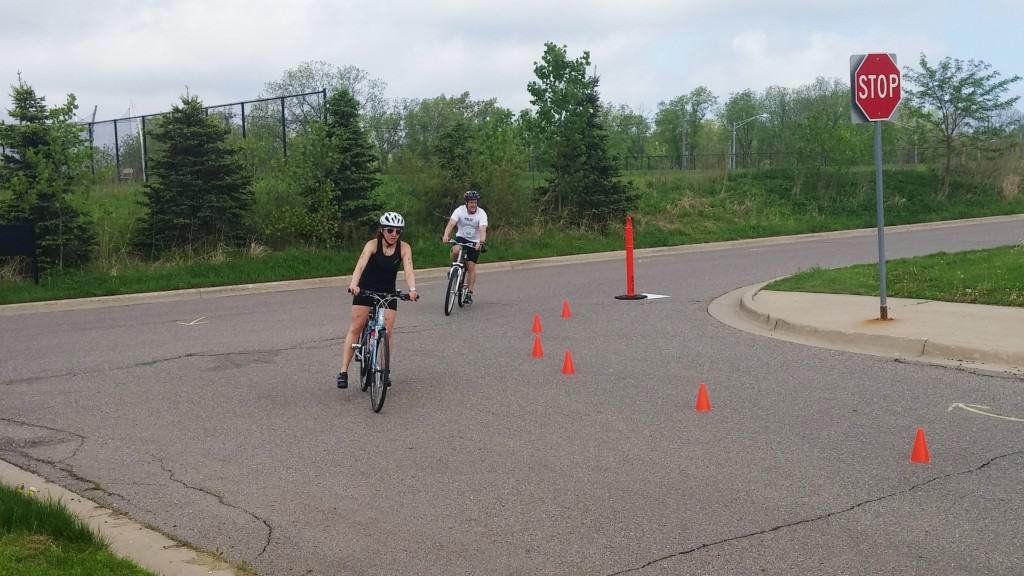 I began the run with my legs feeling like lead/bricks/jello. I was expecting this and had done two bike-to-running brick workouts to mentally prepare myself for pushing past this feeling. I just kept telling myself to keep moving and had a counting chant going on in my head to keep my pace were I wanted it. I should also say I am new to running without music and you know what, I don’t hate it like I thought I would. It’s different, but not bad. This course had some hills, but again I was prepared for these. I run hills on a weekly basis, not so much by choice but where I live just so happens to be by a giant hill so when I run to the park I have to get over a decent sized hill, twice. I finished the run strong and really gave it all I had the last .25 miles. My total run time was 27:17. I crossed that finish line with a huge smile on my face at 1:27:10 and saw my friends and family ready with high fives and ready for {sweaty} hugs. I don’t think I could have asked for a better first time experience. Icing on the cake to all this awesomeness is that I took 1st place in my age group. Race results here. BOOM. “Like a BOSS” – another Jeremy quote. 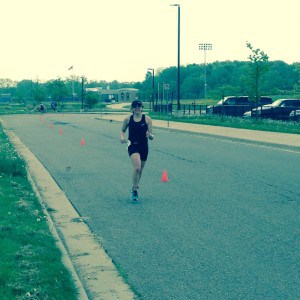 As far as sprint tri’s and triathlons, this is just the beginning.

In non-race recap news, Sunday was also the release of Taylor Swift’s new music video Bad Blood in which she included a handful of her best friends. I was already a fan of the song but this video makes it even better.  Just saying, if I sang and made music videos I would also include my besties, rocket launchers, samurai swords, explosions, and futuristic sports cars.