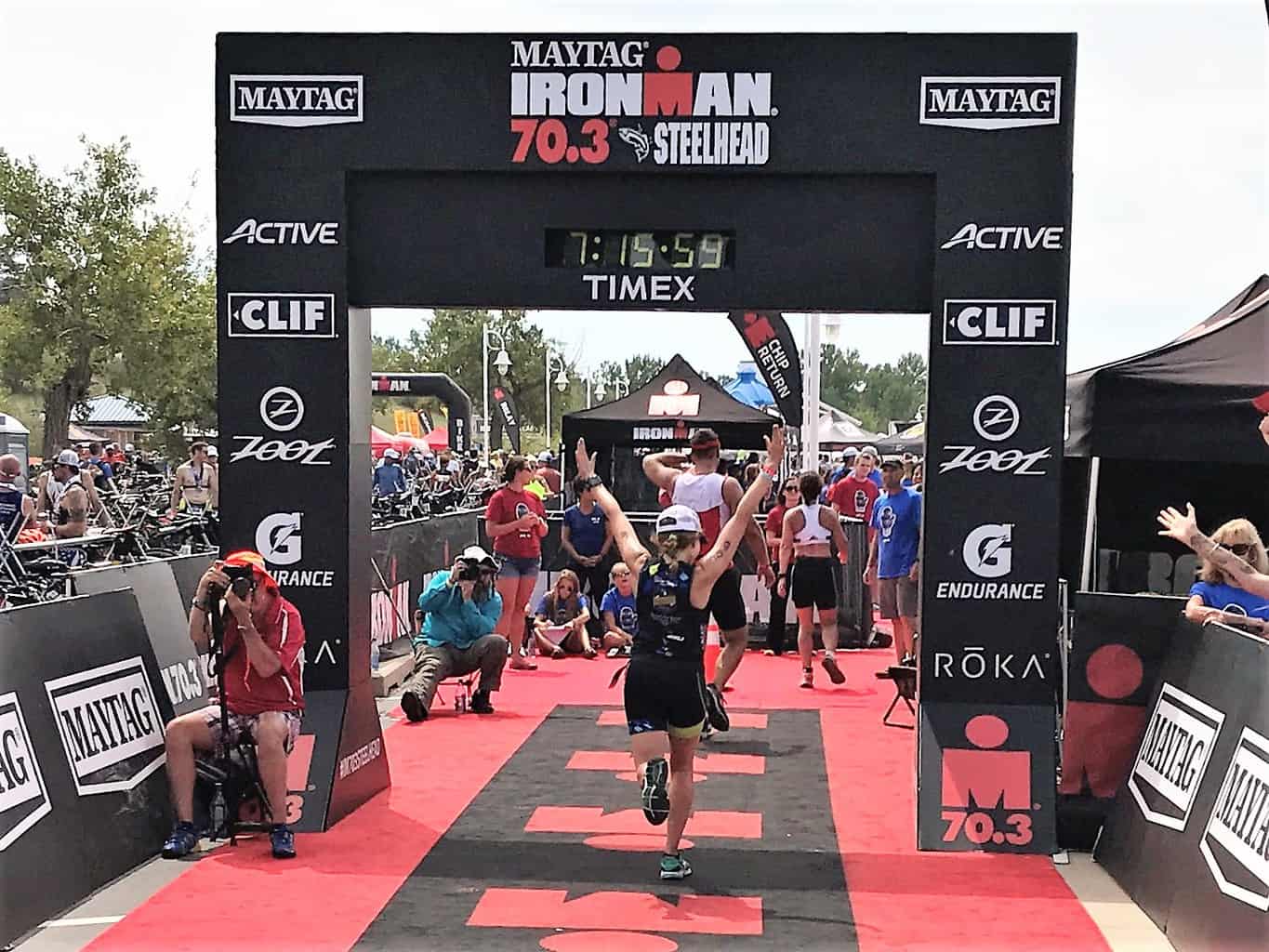 A week ago I completed Steelhead 70.3, my FIRST HALF IRONMAN!  My friend & triathlon training partner, Uryna, and I signed up together last fall – this was both of our first 70.3. And now, I cannot believe the race has come and gone.  This summer has been a crazy, fun whirlwind with a busy work schedule, 4 weddings + showers + bachelorette parties, and a few camping trips. I had many thoughts the week before the race…. some of them included: “Why didn’t I follow a training plan more… or ehhh at all” “I really hope I finish” “OMG this is going to be awesome” “Please let the waves be chill” “What is this going to feel like” “Why THO” “Please don’t let me get a flat”

Uryna and I headed to Benton Harbor Saturday morning so we could attend the last race meeting of the day at 2pm on the beach, pick up our race bibs/packet, shop at the Ironman store, and put our bikes in transition. 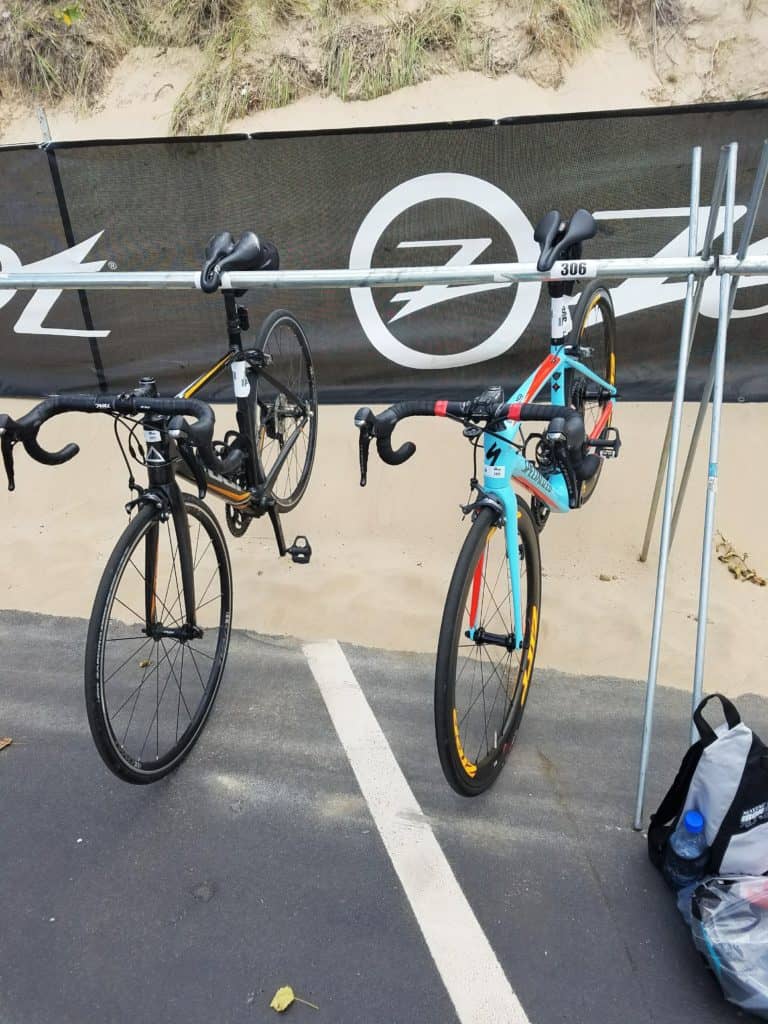 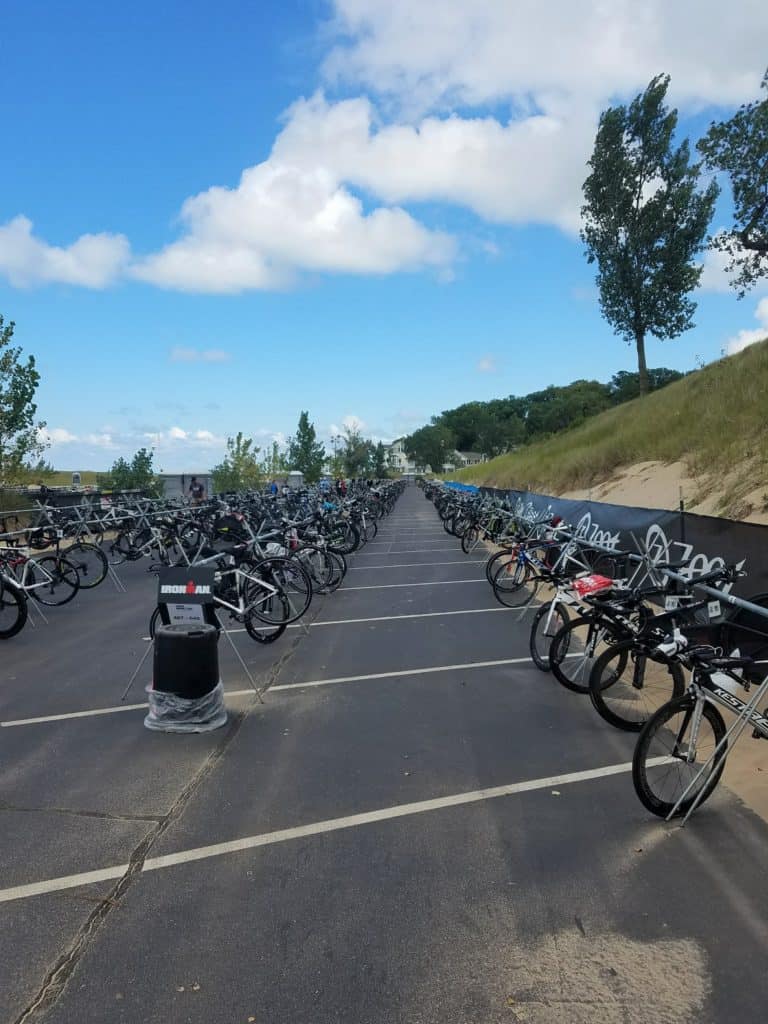 Lake Michigan was looking fierce on Saturday with 2-3 foot waves and I was freakkkkingggg out on the inside. The race director said they have only cancelled the swim twice in the last 15 years due to unsafe water conditions and I was reallllyyyy hoping our year would not be the 3rd. I really wanted to swim and also really wanted calmer water. 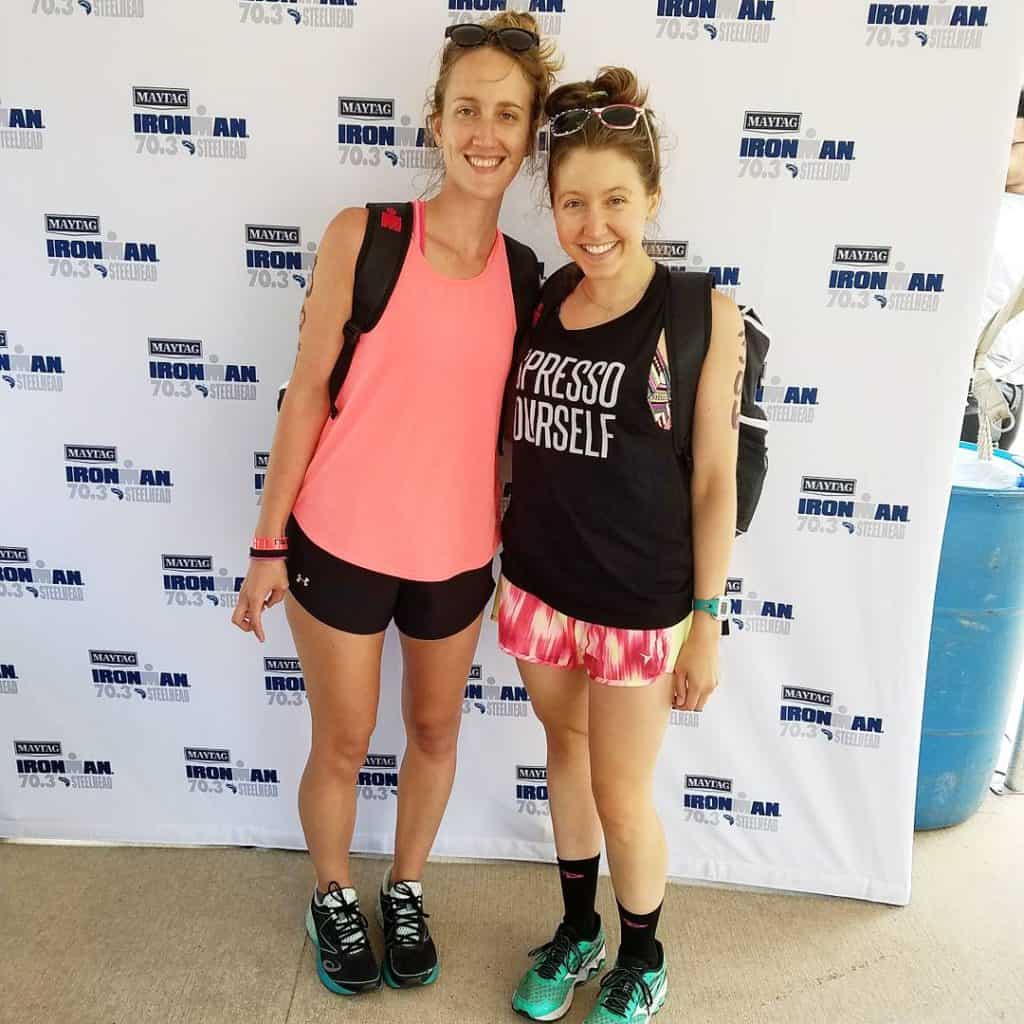 After scoping out the area and buying allll the things we went to fuel up at Silver Harbor Brewing Company. The place had a cool vibe and character – I really liked the wooden bar. They smoke beers so there was always this slight woodsy incense aroma which I also liked. 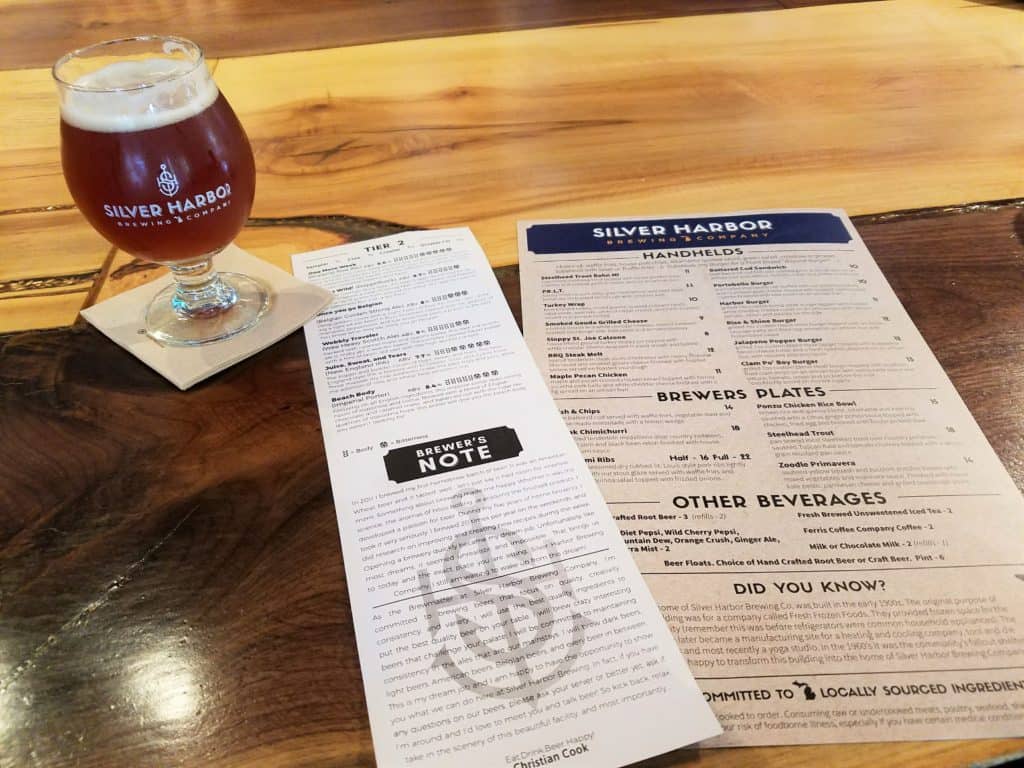 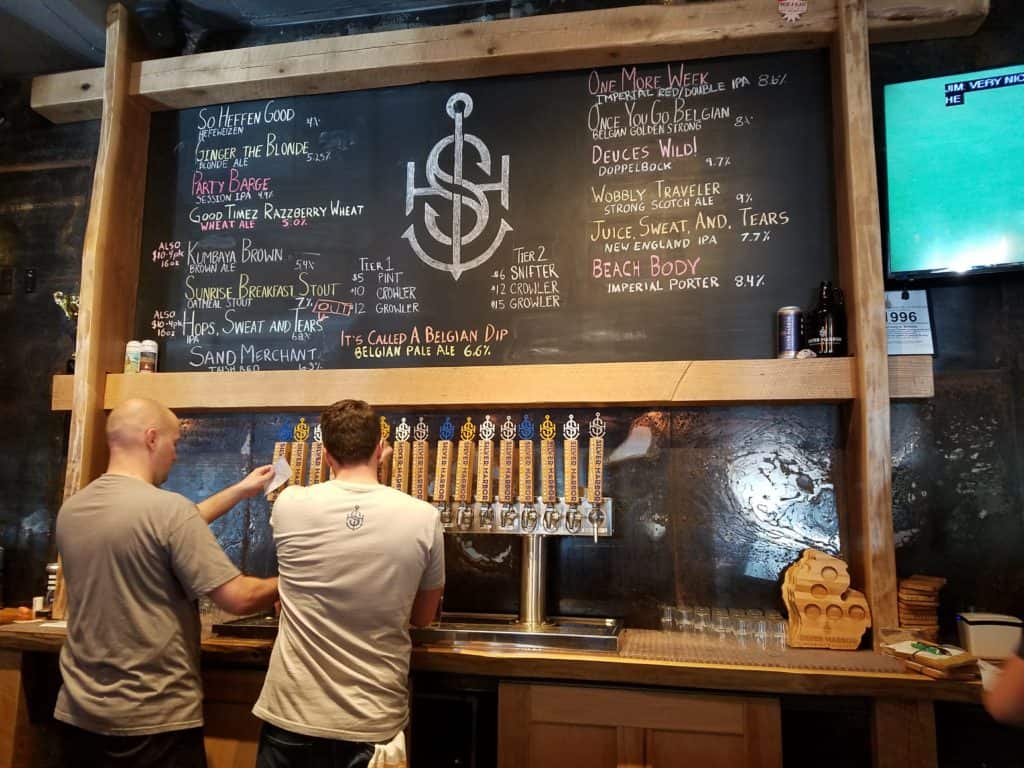 I enjoyed their Imperial Red Ale, One More Week, and a Mushroom burger with waffle fries. I was pleased to see they had the option to upgrade any of their burgers to a “plant-based beyond burger” which I assumed was the Beyond Meat burger but forgot to ask. 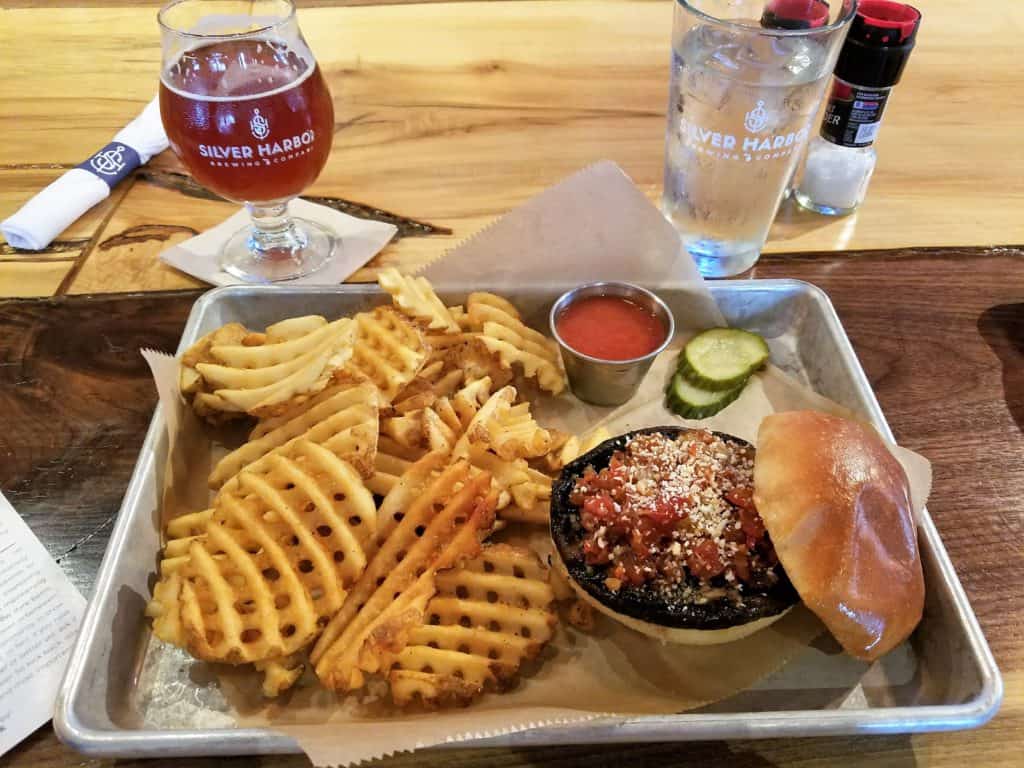 The morning of the race we woke up at 4:45am, had a banana + peanut butter, 1/2 of a pretzel bun from Trader Joe’s (these things are amazing), & coffee for breakfast and headed to Jean Klock Park. Walking up to the beach was the moment of truth and much to our desire Lake Michigan was significantly calmer than the day before. 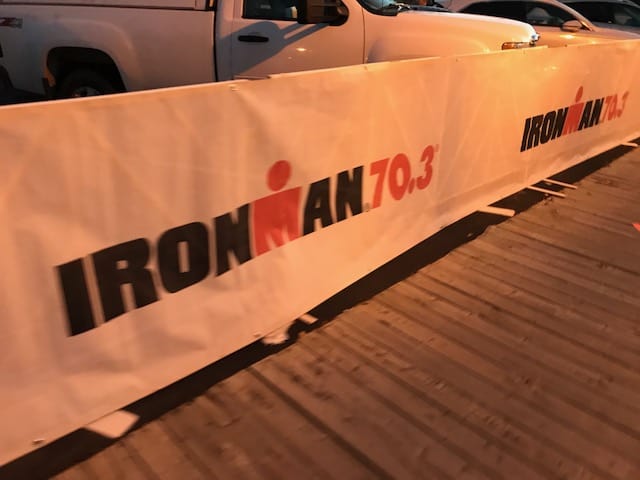 We set up our transition and then went to get in line at a port-a-potty where we waited wayyyy to long, so much that the announcer stated transition was closing in 1 minute and there was still a guy in front of us.  Next time, I know to find one outside of transition.

We ran out of transition, put on our wetsuits, popped 2 Imodium, and headed to the beach. We then warmed up in the water as the pros started which was something else I did not know we could do. Initially I was stressed and rushing to get in the water before the race started because I thought I wouldn’t be allowed in once the first swimmers were in the lake. False. You can swim on the inside of the buoys. So we did for about 15 minutes then hung out in the water because it was warmer than the air. 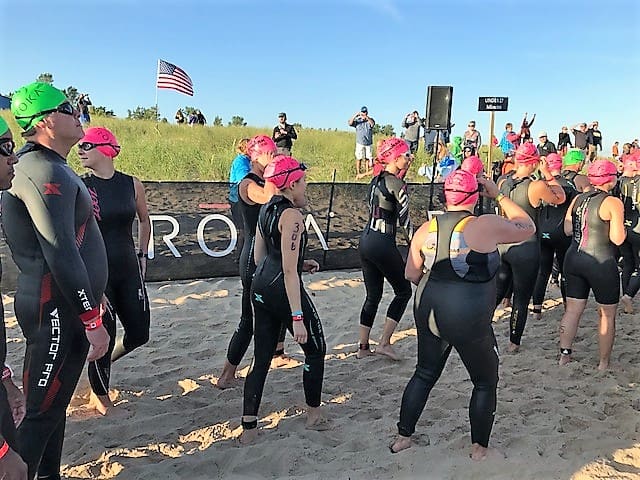 Once it was time for us to get out and get in line the nerves set back in. However once we actually started swimming I felt much calmer and just happy to be our there doing the damn thing. The first 600 yards was the toughest for me because there were so many people in close proximity. Even though I have been practicing open water swimming with the Ann Arbor Triathlon Club this was a little more intense and I found myself breaststroking more than I wanted to. This is an area I look forward to improving. 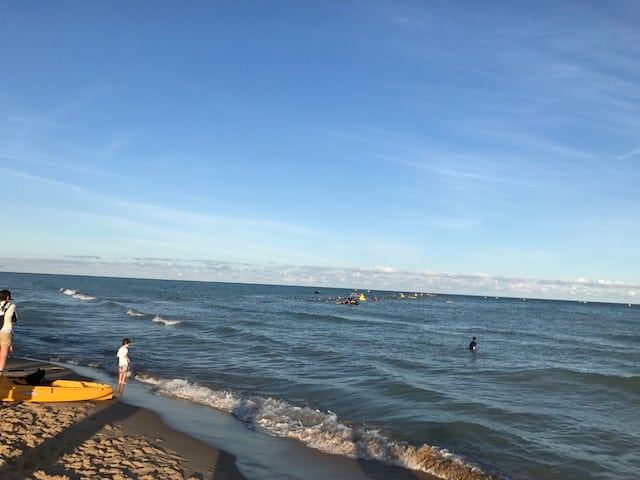 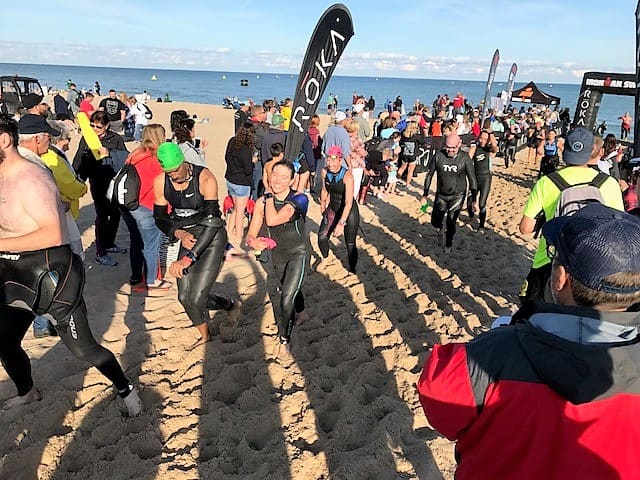 The bike was the most fun for me! I decided to race on my road bike even though I bought a tri-bike earlier this summer. I only road my tri-bike a few times after getting a proper bike fit (Shout out Jess at FitMi) and I am just not confident/comfortable enough in the aero bars yet. Riding my Amira was the right choice and I hope next season to spend more time training on my Shiv. 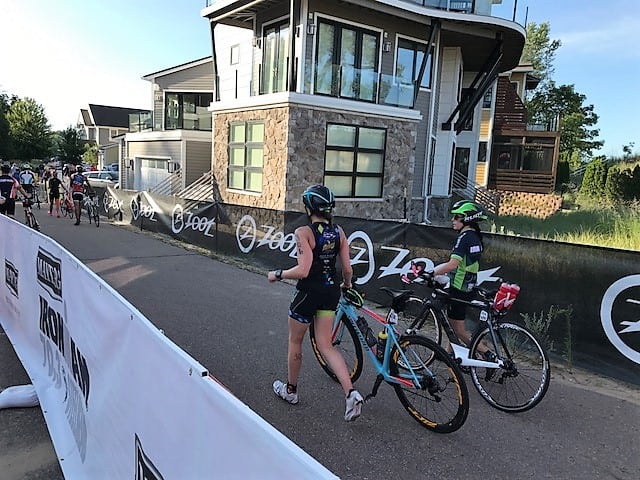 Once I was off the bike and onto the run I had this joyous realization that I was going to finish. The volunteers and bystanders made the run great. I walked the aid stations – where I hydrated with water, Gatorade, and ate 2 pretzel sticks, an orange slice throughout the run.

During the run at an aid station I poured a glass of water on myself to cool down. Next thing I know my kit is suddsing up like a washing machine. Each aid station I tried throwing more water on myseld but it just made things worse. So for about 45 minutes, maybe an hour, I ran with bubbles all over my torso. Why did that happen you may ask? Well, earlier that week a bottle of shampoo spilled in my sports bag. I thought I had cleaned everything but missed my race belt. When I got the belt wet by pouring water on me it started to bubble. Good times. 🙂

At mile 12 a man gave me a high five and yelled “You’ve got this, you’re almost there” and I started to tear up. 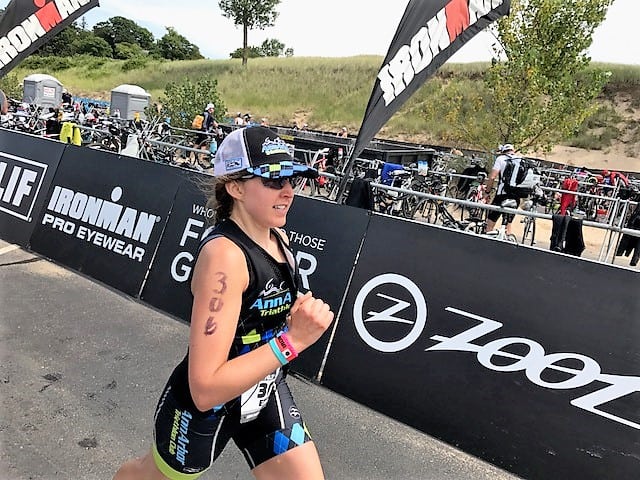 Crossed the finish line after 6 hours and 19 minutes feeling like a bad ass. 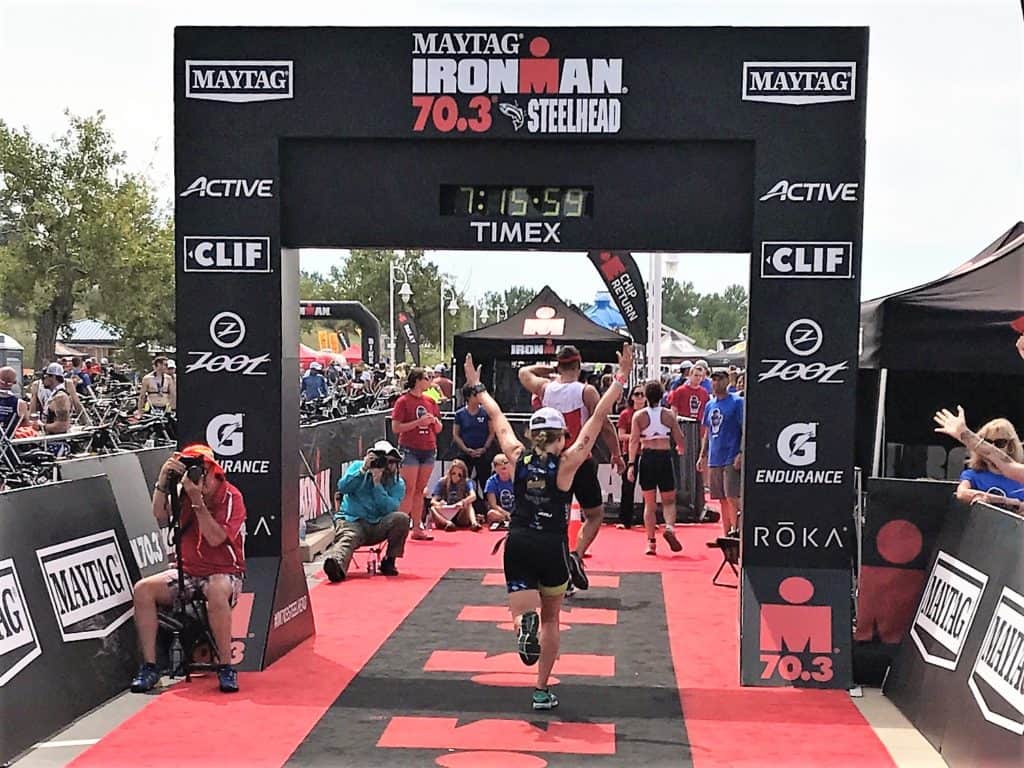 As cliché as it sounds, this day is a reminder I can do whatever I put my mind to. The human body is amazing and the brain is much stronger than the body. 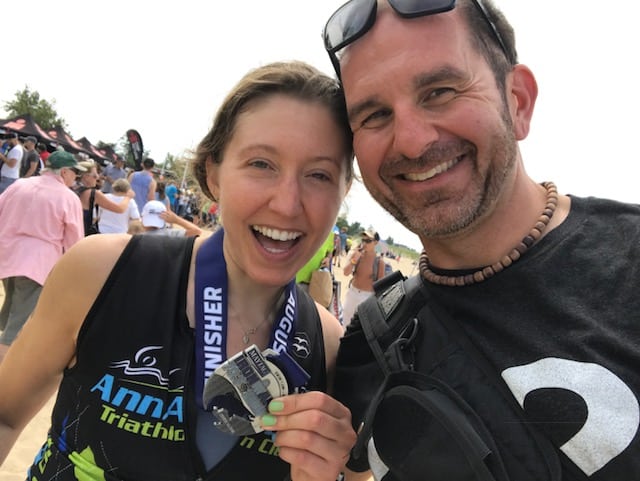 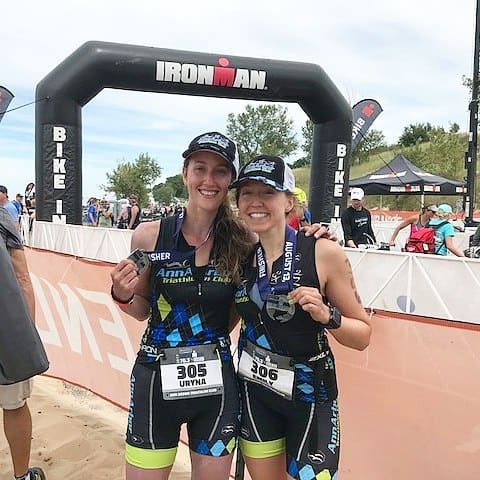 Still on a high from Steelhead we already signed up for Madison 70.3 next June.