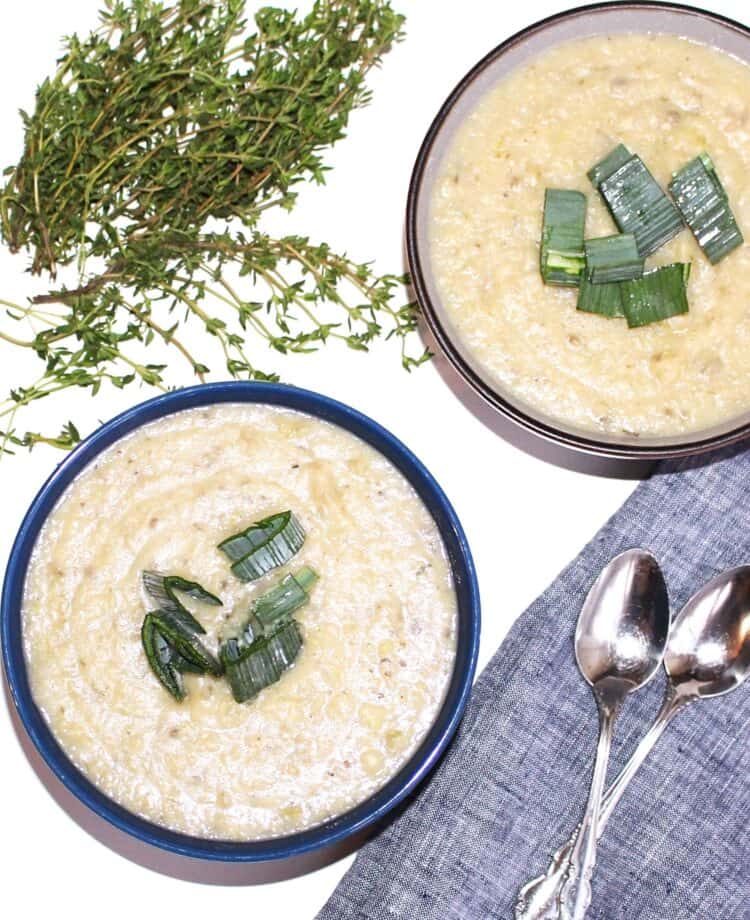 This creamy, delicious vegan potato leek soup is a Sunday meal-prep must for an upcoming busy week.

If you are like me, once the temp gets below 50 degrees F, it’s soup season. The great thing about soups is that they are generally one-pot meals, making clean up a breeze. Soup also makes great leftovers, often with the flavors intensifying once it has had the chance to sit, or “marry”, for a couple of hours or overnight.

Potatoes are a pantry staple around here because of their versatility and considerable shelf-life. When stored in a cool, dark place potatoes can last for weeks to months. Store potatoes in a basket or loosely covered bag to allow for air circulation and do not store them next to onions. Onions produce and release ethylene gas, which can cause nearby potatoes to rot and spoil more quickly. I typically store my potatoes in a brown paper bag in the garage and onions on the counter top in the kitchen.

This vegan potato leek soup recipe uses canned coconut milk and cashews blended with veggie broth in place of dairy milk to make it vegan. Don’t worry, you will not taste the coconut! You will, however, have a creamy soup without using any cream. Using broth that is labeled gluten free, or a homemade broth, will also make this soup suitable for those who follow a gluten free diet.

Another unique ingredient in this nutrient-packed soup is mushrooms. I used to love cooking with cream of mushroom soup and wanted that savoy, umami flavor that mushrooms have to be in this dish. This recipe calls for button mushrooms but but any mushroom will do!

Storage: Store in an airtight container in the fridge for up to 5 days. You can also freeze the soup and reheat when ready to eat.